Wine tasting was free but there was a $15.00 entrance fee for the rental of a wine glass.

Live entertainment was provided during the entire meeting. Here the enthusiastic attendees get ready for the Corkscrew Polka.

Amidst the throngs of people attending, it was not unusual to see go-withs lost and separated from their coveters. Some had not been found when the meeting ending.

The Second Annual Meeting was to be held in Greater Floyd concurrent with the Floyd International Fiddler's Festival (FIFF). That will now be the location of the Third Annual Meeting. 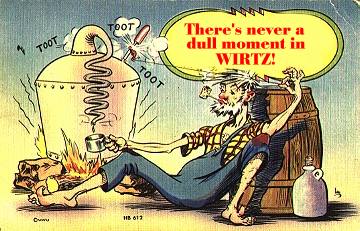