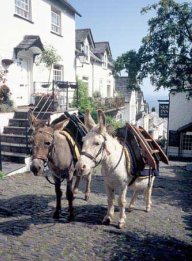 Clovelly is a beautiful little Heritage Village built on a valley side in North Devon, South West England. It is famous for three things: Its steep cobbled street ....Its fishing harbour....... And its long association with Donkeys.

It is also famous amongst corkscrew collectors for a few souvenir corkscrews that were sold in Clovelly.

The village is mentioned in the Domesday Book and so is more than 900 years old. There is an iron age settlement above the village at Clovelly Dykes.

In the mid 1880's the village was rescued from decay and restored by the lady of the village, Mrs Chrisitine Hamlyn. She saved many cottages, had the stream culverted, the street completely cobbled and had mains water and electricity installed to every cottage. Her imagination can be seen in the charming finishing touches and the seats and wooden summer houses she built around the area.

The street is extremely steep and in places so narrow that even today it is not possible to get motor vehicles into the village. In days gone by any goods that needed to be carried up the street were carried on the donkeys. The donkeys never carry goods down the street as the sledges are used for that. The donkeys carried the post, ash from peoples' fires, fish up the back road and many other things.

Tourism has been an important source of income for the villagers even before Mrs Hamlyn's time. It is the reason the donkeys are still here today. When donkeys fell out of use for other jobs and the fishing industry had declined the New Inn, in the centre of the village, still had all its goods carried up by donkeys. Until the 1990s the donkeys were still carrying up visitors' luggage, the empty bottles and beer barrels, laundry, cardboard and rubbish bags. For this they use our special pack saddles.

For a while donkeys carried tourists up from the harbour to the fountain but this was stopped in the 1960s as adults (who are too heavy) were being allowed to ride the donkeys. After the New Inn had changed hands several times the donkeys were left with just the luggage to carry, which they still do occasionally. Today, in summer, the donkeys give children rides around their meadow and can be seen posing for photos in the street. In winter the local children ride and drive them in the woods. At present there are 11 donkeys and 2 mules. 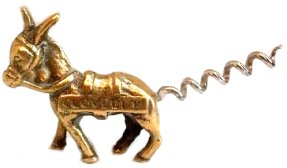