Rock Island, Illinois - This sterling silver handle knife is the work of Edward Todd & Company of New York York City. The company was founded in 1869 being a successor to the Newton, Kurtz & Co. firm. The company was incorporated in 1897. The knife blades were produced by E. T. & Co. in Germany.

The knife is engraved with "Wm. Jackson, Rock Island, Ill."

William Jackson's obituary was published in the Rock Island Argus on September 16, 1925 (courtesy of John McDonald). This is the story of the man who owned the silver knife: 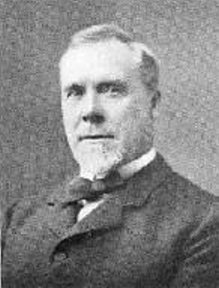 William Jackson, oldest member of the Rock Island County Bar association, died at his home, 824 Twentieth street, at 10 o'clock last night. He was 91 years old.
As late as Saturday, Mr. Jackson was in his law office in the Robinson building, attending to the duties of his practice. The fatal collapse came Sunday, almost without warning.
Last spring Mr. Jackson's health declined when intestinal trouble set in. He spent the summer months at Wequetonsing, Mich. recuperating. On August 28, Mr. Jackson returned home, apparently recovered. He immediately resumed his daily work with his law associate, William P. Barth, a grandson. At his office Saturday he neither complained of, nor indicated any signs of a relapse.
Mr. Jackson was for 65 years a practicing attorney in Rock Island. He had won many honors of his profession, but had steadfastly refused to be a candidate for any elective office. He was a charter member of Rock Island lodge No. 658, A.F.& A.M.
Despite his advanced years, his remarkable intellect was with him to the last, and but for the inroads of his fatal illness, had preserved his remarkable physical stamina throughout his life. In testimonial of this was the vigor he displayed in his practice long after many others would have been content to reap the rewards of leisure such a distinguished life provides.
Surviving are Mrs. George M. Babcock, a daughter, three grandsons, William P. Barth, George and William Babcock, and granddaughter, Miss Elizabeth Babcock, all of Rock Island. A daughter, Mrs. Carrie Barth, preceded him in death.
The funeral is to be held at 10 o'clock Friday morning, at the First Methodist church. Rev. J.A. Chapman will officiate. Services at the grave in Chippiannock cemetery will be private. W.R. Moore, president of the Rock Island County Bar association, has issued a call for all members to meet at the court house at 9 o'clock Friday morning to attend services at the church in a body.
The oldest member of the Rock Island county bar in actual practice, Mr. Jackson's career was as distinguished in accomplishment as it had been long in years. Not only in law had he made the weight of his personality felt, for he was known as the father of Rock Island's park system, because of his effective work in its behalf, dating from years ago, and he was a consistent member of the Methodist Episcopal church for many years. In all these pursuits he had gained lasting esteem.
Born in Liverpool, England, Aug. 14, 1834, his father's name being William Jackson, born at Hundracre, Staffordshire, England, and his mother's name being Ann Potts, born at Goxall, Staffordshire, he was educated in the school of the Wesleyan Methodists at Liverpool. He completed his British schooling at the Liverpool Collegiate institution, an Episcopal school, and his first work was as a grocer's apprentice in his native city.

On July 2, 1851, Mr. Jackson and his mother landed at New York, having emigrated with the intention of making their future home in this country. They reached Rock Island in August, 1851. Young Jackson went to work in the plow factory of John Deere in Moline. He worked at various occupations until the fall of 1856, when he entered the law office of H.L. Smith, a practicing attorney in Moline, as a law student. In 1859 his mother died in Moline, and on September 6, 1860, he was admitted to practice in the courts of Illinois. Directly afterwards he became the law partner of James Chapman, and the business was conducted in Moline under the firm name of Chapman & Jackson, continuing until May 1862, when Mr. Jackson removed to Rock Island. While he was a law student in Moline, during the spring of 1859, he was elected township collector.
Jennie E. Sammis, then a teacher in the Rock Island public schools, became Mr. Jackson's wife on May 21, 1865. She preceded him in death. A daughter, Mrs. Hattie J. Babcock, resides in Rock Island.
Sept. 6, 1925, the 65th anniversary of Mr. Jackson's admission to the bar, found him still engaged in the practice of his profession. He was remarkably well preserved, although 91 years old.

It is considered doubtful if any attorney in western Illinois has taken part in more cases than had Mr. Jackson. Sixteen years ago this fact was called to the attention of the public, and it was then determined by Circuit Clerk George W. Gamble, from the dockets of Rock Island county, that Mr. Jackson had participated in 1,376 law cases, 579 chancery cases; had defended in 88 criminal cases and participated in the prosecution of 11 persons for murder, three for attempted murder, and four for larceny. Moreover, this list did not include the many cases in which he had, during his long practice, been interested in the county court or the proceedings in the probate court in the adjustment of estates, in which he had a part. In addition, he had practiced extensively in the circuit courts of 15 counties of Illinois other than Rock Island, and in the appellate and supreme courts of the state. And the trials before justices of the peace, in which he had taken part, are believed to total more than the cases in which he had appeared in the courts of record.
In his latter years he was in the court frequently and actively as the legal representative of traction corporations such as the Tri-City Railway company and the Rock Island Lines. As a matter of fact, Mr. Jackson had been identified with some of the most famous proceedings in the history of Rock Island county courts, both civil and criminal. Among the more important of these was the long series of injunctions in Whiteside and Henry counties, affecting the removal of the head offices of the Modern Woodmen of America from Fulton to Rock Island. As associate counsel for the order, he was largely responsible for the vindication of the will of the order to transfer its headquarters to this city. To do so, he found it necessary to procure special legislation and to triumph in a series of litigation that taxed some of the country's best legal minds.
When Mr. Jackson came to Rock Island from Moline in 1862, he opened a law office, and in January, 1864, he formed a partnership with E.D. Sweeney and afterward with Charles L. Walker. In the first instance the firm name was Sweeney & Jackson, afterward Sweeney, Jackson & Walker. This partnership continued until 1883, when it was dissolved, and Mr. Jackson retired on account of illness. The two years of 1883 and 1884 constitute the only interval between 1860 and 1925 in which he was not in continual practice as a lawyer at the bar of this county. In 1885 he resumed his practice, and four years later he went into partnership with E.W. Hurst, under the firm name of Jackson & Hurst. This continued until 1903, when the firm was enlarged by the admission of John T. Stafford and Elmore H. Stafford, later being known as Jackson, Hurst & Stafford. That firm is now Stafford, Schoede & Stafford, although for several years Mr. Jackson has been associated with his grandson, William P. Barth, as the firm of Jackson & Barth.

An appointment by President Grant in 1872 placed him in the office of postmaster of Rock Island, which office he held until 1876. In February, 1897, he was appointed by Governor John R. Tanner member of the board of managers of the Illinois state reformatory at Pontiac, and he held this office until March, 1901. During his days of activity, Mr. Jackson declined such places of preferment at the hand of his party as the mayoralty, and the state senate, and although frequently discussed in connection with the congressional nomination of the Republican party, he never gave encouragement to the suggestion. He chose to devote his spare time to civic endeavor other than in governmental and legislative posts, and his refusal to accept them left him free to make the remarkable record of achievement that is his in the record of the city's park development. He had always been a Republican in politics, his first presidential vote being for Fremont and Dayton. His religious association had always been with the Methodist church. In England he was in the Wesleyan Methodist body, and in the United States he was identified with the Methodist Episcopal church, being a church member for 75 years.
At the first call to arms in the Civil war, Mr. Jackson joined the first military company that was organized in Moline under President Lincoln's first proclamation, in 1861, for 75,000 men. The company was not accepted, the state quota being filled, and he did not enlist again.
Through the decades of his residence in Rock Island Mr. Jackson had been tireless in his efforts for the common good through improving in every way the city's park system. That it has come to be as fine a system as that of the parks of any American city of Rock Island's size, while not due entirely to his efforts, is nevertheless in great part attributable to the spirit he had shown and the energy he had expended to make it so.

His title, "father of the Rock Island park system," refers to the fact that he was the head of the original Citizens' Improvement association. As such he inaugurated the movement for park development. Through the furthering of the plans he proposed, in which project he labored indefatigably, Spencer square and Garnsey square were transformed from bogs, neglected and avoided, into garden spots fitted with handsome accessories and adorned with turf, flowers, shrubs, and trees. He alone raised $6000 for the improvement of Spencer square, and obtained practically all of the features that distinguish it. He gave the incentive for what was done in a similar way for Garnsey square. As president of the park board, which office he held until his death, and in cooperation with other public spirited citizens, he raised most of the $16,000 which was contributed for the beautification of Long View park. The improvements were made under his immediate direction, and for all time the name of Jackson will be associated with the park system of Rock Island.

February 2003 - From John McDonald we learn:

What got me there was that I was searching for any information that might have been put on the 'net about a relative of mine named William Jackson, a Rock Island, Illinois lawyer. (He was the brother of my great great grandmother, Emma Jackson, who married James McDonald and lived in Rock Island County.) Well, I saw that knife and corkscrew and was, of course, fascinated ... I'm the guy in the family who has really been bitten by the genealogy bug, and I try to collect information, photographs and artifacts.

If you have William Jackson memorabilia, contact John at: jmcdonald@accessbee.com

Return to the Signature Collection