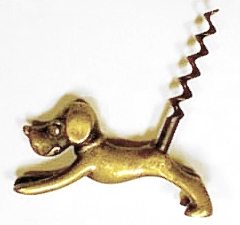 Bonnie and I went to Aruba on February 8. During our week stay, we made our usual visit to the Rococo Antique Shop. There we saw a wood T-handle corkscrew, a figural wood handle and a modern double lever. We left them all there. On Saturday, February 15 we flew to Caracas, Venezuela. After the ride from the airport, we were apprehensive about wandering the streets. We unpacked and decided to venture out. Just around the corner from the Hilton Hotel we were in the Bellas Artes Plaza (Metro stop). We walked by one of the many street vendors hawking products from fold up tables. We passed by a woman selling incense and Bonnie said "Did you see that corkscrew on the table?" I said "No" (she is my spotter!). I turned around and looked and there on the table was the dog pictured. I had not seen this figural before. The woman asked for 4000 Bolivars (US$8.50). I gladly paid it.

Bonnie speaks Spanish and she asked the woman if she had more corkscrews. She said she had many old corkscrews and she would bring them on Monday and would be set up by 1PM. That gave me two nights to dream about all the great things she would have!

Was this just another one of the stories we have heard from dealers so often: "I have some at home and I'll bring them next time."? Or is there a great horde of corkscrews to be uncovered in Caracas. If you go, stop by the tables at Bellas Artes Plaza. Maybe you'll have some good corkscrew fortune.

Bob Roger read this story and wrote: " Don, enjoyed your story about Aruba et al. Nice puppy dog. I'll take it off your hands for a 100% profit! It's the hope for the big discovery that keeps us collecting. A very elderly lady opened an antique store near me about 1 1/2 years ago. I went in right after she opened and asked if she had any corkscrews. Yes, she did -- a very old English one -- but it was still packed in a box at home. Well, you can guess the rest. I keep checking every month or two -- it's still packed somewhere at home. I was back in yesterday. She doesn't have any room left in the store so won't unpack anything else until she gets room -- but keep checking back, she'll get to it eventually. Numerous possibilities exist: she'll never get it unpacked before she dies; she'll get it unpacked and price it out of sight; it'll be a common one that I already have; someone will beat me to it; or-- it really will be the find of the year -- that is why I'll keep going back until I find out." Bob Roger - toolman@vais.net