Wirtz, Virginia - The bunny was first used as a symbol of Easter in the 16th century in Germany. But the association of the bunny and Spring goes back much farther. It goes back to a time before Jesus Christ was born. This symbol of fertility was a pagan sign of new life for in the Spring season. Festivals were held throughout the ages celebrating the bunny (rabbit). German settlers brought the symbolic festivals with them to Pennsylvania Dutch country in the 1700s. And in the next century, edible Easter bunnies of sugar and pastry were gaining popularity in Europe. The bunny even found its way into corkscrewdom. We headlined our brief history of the bunny with a couple of French wood bunny corkscrews.

Chicago, Illinois - Have you ever considered that bunnies were part of pagan rituals? Those Playboy Bunnies?

Hollywood, California - Ben "Bugs" Hardaway first drew "Bugs Bunny" while at Warner Brothers' studio. Bugs Bunny's first appearance in a cartoon was in 1938. A Bugs Bunny corkscrew (below) was designed for the Warner Bros. Studio Store and is found in boxes with 1996 and 1997 copyright dates.

A rabbit corkscrew was chased and caught by a dog. On the bottom of the dog is HICKOK MADE IN FRANCE.

On February 13, 2001 Metrokane sued the Wine Enthusiast, it's owners, and Cisco sales for copyright infringement, trademark infringement, and unfair competition relating to Metrokane's "Rabbit" lever corkscrew and the "Le Rapide" marketed by the defendants.

Considerable arguments were entered by Metrokane and by the Defendant. Ultimately, the judge found "... we find that the Rabbit and Le Rapide corkscrews are not substantially similar in appearance ... we find no intentional copying of plaintiff's trade dress, and no bad faith on defendant's part. For the same reason, we find no significant likelihood that the Le Rapide corkscrew will be confused with the Rabbit corkscrew by purchasers and users. Therefore, defendant's motion to dismiss plaintiff's trade dress infringement is granted.

Metrokane said it introduced the Rabbit in January 2000 and the first was shipped in April 2000. From April to December 2000, they sold 115,867 units with sales over three million dollars. They spent over $323,000 on advertising. The Rabbit was based on the 1980s Screwpull patent which expired on July 8, 1999. They claimed the Le Rapide "copies the non-functional trade dress of the Rabbit ... and is confusingly similar." They described the Rabbit as "the rounded head and the lever, when viewed from the side, resemble the head and ears of a rabbit."

On May 18, 2001 Metrokane filed an amended complaint adding design patent infringement citing the "Insta-Pull" which is identical to the "Le Rapide".

On February 8, 2002, the court stated "It is quite revealing that plaintiff (Metrokane) filed the applications for the two patents in suit only after plaintiff had seen defendant's accused device on the market and had acquired a specimen of it ..." Differences in the corkscrews were presented and the judge ultimately ruled " ...because of the ... differences between the upper portion of the frame of the defendant's accused device and the patented design, the overall impressions they create are markedly different. There is no substantial likelihood that an ordinary observer would confuse the two designs, or recognize in defendant's device any rabbit symbolism. There is not the slightest evidence of an attempt by defendant to appropriate any purely decorative features of the patented design." And in the conclusion is " ... the claims of infringement of the '265 and '045 patents are dismissed without prejudice."

For many more lever pull type corkscrews see the December 19, 2003 issue of The Daily Screw.

Thanks to Robert Alfert of Orlando, Florida for the heads up on the suit information. 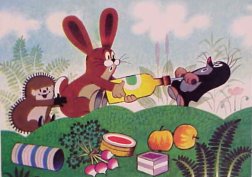