Dr. Fridjof Nansen, explorer was born near Christiania, Oct. 10th, 1861. He was educated at the University of Christiania, and was a naturalist by training. He first visited Greenland in 1882, and in 1888-1889 crossed S. Greenland in snow shoes. In June, 1893, Nansen sailed from Christiania in the Fram, a vessel of 402 tons, intending to drift across the North Pole to Greenland. He reached the highest latitude then attained 86° 14'.

Nansen was honored on a corkscrew knife produced by Carl Schmidt Sohn, Solingen, Germany and a tobacco card issued by John Player & Sons: 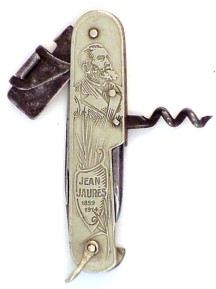 Jean Jaures was one of the leaders of the French Socialist movement during its early years. In 1859 he was born in Castres, France. He was a teacher in Albi and a lecturer in Toulose. In 1885 he entered the political arena. On July 31, 1914 Jaures was assassinated in Paris on July 31, 1914 by Raoul Villain.

An unusual knife with three blades, a corkscrew (short worm), and a can opener remembers Jaures. The can opener is marked "CLE-BBB, Brevete S. G. D. G." The master blade is marked "Couteau-Clé BBB Thiers-France." Copy on reverse is: "Il n'y a pas d'ideal plus noble que celui d'une societe ou le travail sera souverain" - there will be no more noble an ideal that a society where work is king. 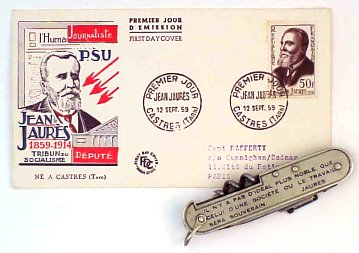