Winterthur, Switzerland - On October 15, 1971 Walter Steiner was granted Swiss patent number 513,767 for his "Zapfenzieher." The simple design was produced and distributed by Steiner's firm "Stewi" which today offers laundry drying racks and parasols.

Extracting a cork with the "Cork Butler" was rather simple. You rest the lower part of the the assembly on the bottle neck and twist the top (white part) to screw the worm into the cork. Grab the ears on the lower part and start turning. The cork rises in the barrel. To remove the cork from the worm, just twist the upper part again to thread the worm and cork down. Unscrew the cork from the worm. It also has foil cutter and cap lifter built into the top.

Readers might be more familiar with Steiner's other patented product - the "Party Jack":

The "Party Jack" comes in a 10" two-part tube. It is a combination cap lifter, can piercer, tin opener, foil cutter, and needle cork extractor. The needle is stored in the handle and reversed and threaded into the body for use. The pump lever has a slide release to operate. Reciprocating action makes for effortless cork removal. 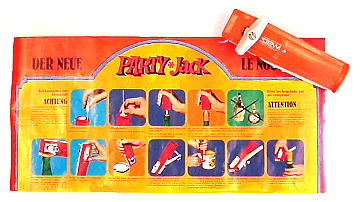 Instructions are in German and French. Three patents were issued to Steiner for this invention - two in 1969 and one in 1971.