Wirtz, Virginia - We continue our special report for upcoming events.

Corkscrew Collectors are packing their bags and corkscrews and heading for Virginia to meet with fellow members of the International Correspondence of Corkscrew Addicts, the Smith Mountain Lake Corkscrew Coveters, and the Patpong Corkscrew Club. And we forgot one group which you will read about in today's edition. 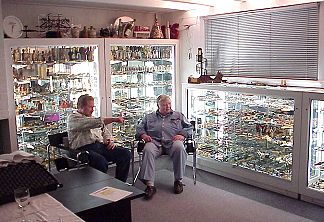 Southern California - Feeling slighted corkscrew collectors Mike Sharp and Jack Bandy who are both members of the ICCA and the SMLCC have reminded us of the SCCCCC. The Southern California Crazy Corkscrew Collectors Club was established during a dinner at Lacey's in Pasadena, California in January 2000. Members attending the first meeting were Jack and his meet-with Betty, Mike and his meet-with Karen, and Don Bull.

Pictures of the first annual meeting can be seen here. Unfortunately, the meetings turned out to be not "annual." As a matter of fact, next month will be the second meeting of the SCCCCC.

The Daily Screw apologizes to Mike and Jack for the oversight.

Shenandoah Valley, Virginia - One of the premiere events of the meeting of the ICCA will be a visit to Bob and Becky Roger's Museum.

Bob says: "See and learn about an absolutely unique collection of items from the Victorian age - implements that were used by your ancestors in domestic and farm life and in the professional crafts. You will see and handle items that you have never seen before - over 1,600 antique tools and implements; 2,200 corkscrews and related items; over 1,000 hatpins, teapots, and cruets; 200 pickle forks; 500 keys; and the list goes on and on. Guaranteed to interest both sexes.

Bob is a member of the Canadian Corkscrew Collectors Club.

The first leg of our journey to Virginia was uneventful: British Airway's trans Asian sleeper from Bangkok arrived at Heathrow a little before 5am London time. As our Four Seasons Hotel room was not ready at such an early hour we were treated by the House to a full 90 minutes of breakfast: kippers, muesli and those oddly cut bits of bacon that the Brits love so much...while waiting for the staff to sweep up the nasty party bits left behind by the last tenants of our room. While admiring our view of Hyde Park from my balcony I noticed that the "tart card" 'minders' had been at work: tearing down the adverts that the London "working girls" post in all those colorful London red telephone kiosks.

North Carolina - Happy Birthday to Jessica (Hope) Fowler. Jessica is still growing worms and is an avid reader of The Daily Screw. She's been reading about corkscrew collector treks and says of the Virginia meetings "This reminds me of a movie that was made many years ago... The Gumball Rally. Why don't you guys have a Golden Corkscrew Rally?"

In The Gumball Rally teams drive cross country.. no holds barred..from NYC to somewhere in California.. The winner gets a Gumball machine... Jessica gives Nick, Alf, Howard, Jack, Mike and others something to ponder when she quotes a line from the movie:

One driver pulls the rearview mirror off and throws it over his shoulder and says, "What's behind me doesn't matter!"