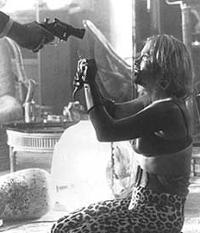 Bitterroot, Montana, November 25, 2003 - The Ravalli Republic reported "Lamar Fawcett, 41, faces two felony charges and a misdemeanor allegation from an alleged altercation early Sunday morning. He was charged Monday in Justice Court with aggravated assault, assault with a weapon, both felonies, and partner or family member assault, a misdemeanor. The fight that allegedly happened at the suspect's residence at Bitterroot Family Campground south of Hamilton resulted in the victim receiving a two- and-a-half-inch cut to the left side of her face, along with other cuts and bruises, according to court documents. Investigators believe she was cut by a corkscrew or knife.

North America - In his Tyranny in the New World, William D. Wylie, Jr., B.S., a student of Sociology details some of the human rights violations in North American history. He discusses the 1904 killing of a white plantation owner. "Luther Holbert, a Negro sharecropper attempted to escape from his home in Vardaman's Mississippi with his wife before a lynch mob could dispense its own form of 'justice.' Catching up with the Holberts on February 7 in Doddsville, the mob bound the couple to convenient trees. While the mob's ringleaders forced the Holberts to hold out their hands in order that their fingers could be chopped off one by one — the audience of 600 spectators enjoyed treats like deviled eggs, lemonade, and whiskey in a festive atmosphere. Next, the Holberts' ears were amputated and those severed appendages, along with the disconnected digits, became much-prized souvenirs. Mr. Holbert was beaten severely enough so that his skull was fractured and one eye was left dangling from its socket. When someone in the crowd produced a large corkscrew, that instrument was used to alternately bore into husband and wife, each time gouging out spirals . . . of raw, quivering flesh when withdrawn. Finally, the tortured man and woman were burned alive like Christian martyrs. This final imagery — juxtaposed against a tableau of picnic treats — demonstrates the sheer dehumanization of lynching for both victim and perpetrator. "

Wish We Hadn't Read That

Pennsylvania, 1998 - On Findlaw.com we found in the death penalty news: "Suspects in the torture and slaying of a runaway 13-year-old girl that was inspired by the lyrics of a rap song has been arrested on the Caribbean island of Trinidad, authorities said. Northampton County District Attorney John M. Morganelli said his office was notified of the arrest and was preparing paperwork for the extradition of the suspect, Kwame Henry of Brooklyn. He said his office will seek the death penalty. The 13-year old's decomposed body was found Aug. 10, 1996, in a cold storage vault at a cemetery. Authorities said Henry, Corey Maeweather and Stanley Obas dumped it there after torturing and killing the girl. Maeweather said Henry and Obas used a turkey baster, corkscrew and electrical cords to torture the girl. "