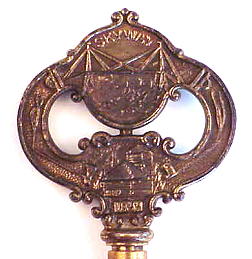 Chicago, Illinois - During the 1933 Chicago "A Century of Progress" fair, the Great Lakes Dredge & Dock Company gave out a key with a corkscrew inside the sheath.

Great Lakes Dredge & Dock Company is headquartered in Oak Brook, Illinois. The company is the largest dredging contractor in the U.S. and one of the largest in the world The company was established in 1890 as the partnership of William A. Lydon & Fred C. Drews. Lydon & Drews' first project was construction of a brick-lined water tunnel for Chicago that extended beneath the bottom of Lake Michigan from the shore at Chicago Avenue to a new intake crib two miles out in Lake Michigan. Tremendous expansion followed in the 1890s, as cities on the Great Lakes flourished. Projects at the time included many piers, lighthouses, and harbor facilities at cities throughout the Great Lakes, and the shoreline structures for Chicago’s Colombian Exposition in 1892, including the foundations for what later came to be known as Navy Pier. 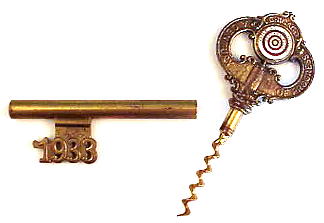