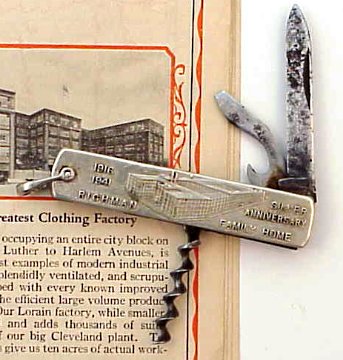 Cleveland, Ohio - In 1928 The Richman Brothers Company described their operation as "The World's Greatest Clothing Factory." A knife with nickel silver handles depicts the building. Richman was established in Cleveland in 1879 and knife has this message: "Richman Family Home, Silver Anniversary, 1916 - 1941. "In Cleveland the Making of a City by William Ganson Rose (World Publishing, 1950) we learn, "...the first unit of the Richman Brothers factory at 1600 East 55th Street opened in 1916."

Richman's 1928 "Official Road Map" gave the addresses of 31 Richman stores in 30 cities. A client could buy a suit, a topcoat, or a tuxedo in any of these stores for $22.50. If no stores were convenient, catalogs and woolen samples were available by mail.