My First Screw by Albert Beliard

I never expected to become involved in the hobby of collecting corkscrews, but I was one day hit by that invisible collecting "bug" when I was actually attending an antique gunshow in Orlando, Florida about five years ago.

As I was walking around the gunshow admiring Imperial German collectible pistols, I happened to pass by a dealer's table which displayed Third Reich items, and to my unexpected surprise, I saw a spectacular corkscrew which caught my attention from out of the blue. I admired its combination of features which were irresistible, and I humbly asked to handle it. It had an ivory boar tusk with a detailed sterling silver figure depicting a hunting dog carrying a partridge in its mouth and, moreover, those stunning ruby eyes placed a spell on me which I shall never forget! 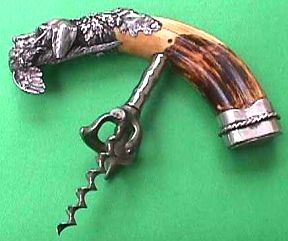 I asked about its provenance and I was told that it was obtained from the hunting lodge of Luftwaffe Field Marshall Hermann Goring after the end of the war. I nearly fainted when I was told the asking price of about $4,000, but its exceptional beauty and its unavoidable spell started my addiction for vintage boar tusk corkscrews. Unfortunately, I couldn't afford the Goring corkscrew at the time, but it definitely made me an impact on me, and my "hunt" for ivory boar tusks corkscrews was on its way.

I have found a few nice ones for my small collection, and I especially love those which are fancy or carved. While I am still young to this area of collecting, I always admire my few corkscrews while sipping a good glass of German wine.

I would like to thank Don Bull who was able to find some images of this fabulous corkscrew, and I regret that it was not my time to be the proud owner of it when I held it in my hands. I only held the Goring for a few seconds but for that brief moment it was My First Screw. I have tried to find the current owner just to know who owns it, but I have had no luck in finding that collector.