Detroit, Michigan - In 1854, J. Sterling Morton and his wife left their home in Detroit and headed West. They stopped in Nebraska, found some land, and started planting trees. Shortly after they settled, Morton became editor of Nebraska's first newspaper and used it as a forum for dispensing agricultural information. Trees were planted everywhere.

On January 4, 1872, Morton proposed a tree-planting holiday to be called "Arbor Day" at a meeting of the State Board of Agriculture. The date was set for April 10, 1872. It was estimated that more than one million trees were planted in Nebraska on the first Arbor Day. In 1885 Nebraska established Morton's birthday, April 22, as a legal holiday.

The movement grew and other states passed legislation to observe Arbor Day. Today the most common date for the state observances is the last Friday in April, and several U.S. presidents have proclaimed a National Arbor Day on that date.

The Daily Screw celebrates Arbor Day with the Corkscrew Willow: 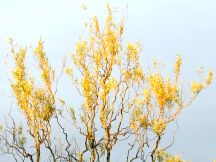 The "Corkscrew Willow" was introduced into the United States in 1923 from China. It is a derivative of the Hankow Willow (Salix matsudana), a tree dedicated to the great Japanese botanist Sadahisa Matsudo who cataloged the plants of China. The Corkscrew Willow (Salix matsudana cv. Tortuosa) is filled with many twists as the name implies - even the leaves are curled and twisted. The tree normally grows to about 30 feet, and occasionally up to 50 feet high.

Thank you to reader Mike Sharp for the Willow tip.

France, April 25, 1949 - In August of 1947 Arsène-Jean Grandfils applied for a French Patent for a single lever rack type corkscrew. Today he was granted Patent Number 951,926. The steel corkscrew is called the "Traifor."

To operate the Traifor, you pull the handle all the way down, then turn the worm into the cork. The handle is then lifted up and over the assembly in order to extract the cork. Lower the handle to remove the cork from the worm. Grandfils advertises it as Simple, Practical and well made. It even has a cap lifter built into the handle for added convenience.

The Answer will be seen in tomorrow's Daily Screw.