The Luterman Cane made its first appearance on ROBIN LEACH'S TALKING FOOD on July 24, 1994. On August 30, 1994 it appeared on PERSONAL F/X. and on November 21, 1996 on the AMERICAN COLLECTOR hosted by Ron Mirabile.

The Luterman Cane was carved in the last decade of the nineteenth century. The Model for the carving was a Philadelphia Accountant named Howard Luterman. The carving has been attributed to both Derek White and Pat Capazolli. Apparently they were both active bone carvers at the time.

Ok, now that this page has been here awhile, it is time to come clean. Yes Leach, Burke and Mirabile were all duped. It's time to recognize the real Luterman who posed for the cane: 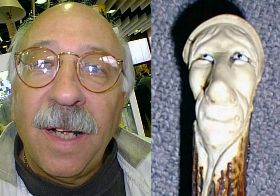 Now you know why it is called the Luterman Cane!!!