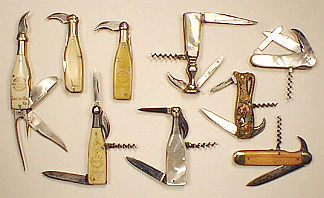 The Patent Drawing shows the blade on the bottom of the bottle shape knife at left above. The "cork turner" blade is marked KORN'S PATENT. The knife blades are marked HENRY SEARS & SON 1865 (the year founded). The foil cutter is marked REGISTERED. The knife to its top right is the same with the blades closed. To use it, the long prong is carefully slipped in beside the cork until penetrated by the short prong. Four serrations on the long prong just below the point on the short prong engage the cork. A twist to break the cork free from the bottle wall and a long, slow pull will nicely draw out the cork.

The knife on the top right has one blade marked D.R. PATENT 14392. This is a German patent of December 31, 1880 issued to Bierhoff & Wever of Solingen. The worm is raised from its compartment by depressing the lever on the back of it thus operating in a similar fashion to the foil cutters described above.

The master blade of the knife at bottom right is marked HALLSTROM ESKILSTUNA (Sweden). Depressing the foil cutter raises the cork in the same manner as the bottle foil cutters.

So why are some of the bottles marked KORN'S PATENT when they don't appear to be Korn's Patent at all? All of the knifes with corkscrews in the photo appear to be more like the Bierhoff & Wever patent than the Korn's.

My guess? The manufacturers of the Korn's Patent realized that it was a rather impractical, cumbersome method of pulling a cork. The Bierhoff & Wever concept was better and the bottles were changed to use this method. Leftover foil cutters with the Korn's Patent mark were used in the manufacture even though the knives produced were not that patent.