We have long been intrigued by the "Pat. Pend." mark on this plastic handle prong puller from the Steak Joint. It also has "Made in Hong Kong" molded into the handle. That would lead one to believe that "Pat. Pend." refers to a Hong Kong patent. It came in a colorful box which has space for a name an address to mail it. Hey, you had a good meal there, why not buy a souvenir and mail it to a friend. 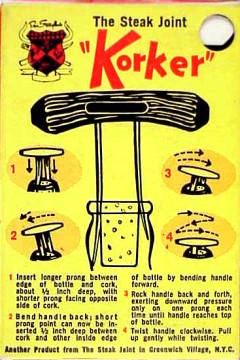 We checked out the 58 Greenwich Avenue address on the box. That's now the home of Fiddlesticks Pub and Grill. There were no clues there about the patent.

And on the box we learn that this is "Another Product from The Steak Joint in Greenwich Village, New York City." Were there other products? Yes, we know steaks. But perhaps t-shirts, mugs, hats, and more. How about a Doggie Bag? In Nation's Restaurant News we learn from Jane and Michael Stern:

"The doggie bag originally was conceived ... so customers could carry home food without the embarrassment of feeling greedy. It was Dan Stampler of The Steak Joint in Greenwich Village, New York, who first offered a thermal bag for leftover steak. Stampler, who was known for serving big portions, emblazoned the bag with a picture of his Scottish terrier, thus implying that those who left the restaurant with a bag of food were kind-hearted animal lovers rather than omnivorous steak gluttons."

We now had a name to go with the Steak Joint - Dan Stampler. So we went to the United States Patent Office website and searched "Dan Stampler." Nothing. Then we searched "Daniel Stampler" and there it was - U. S. Patent Number 3,257,873 issued June 28, 1966. Daniel applied for the patent on October 7, 1964 and do you know who it was assigned to? Sure enough - The Steak Joint Inc., New York, N. Y., a Corporation of New York. 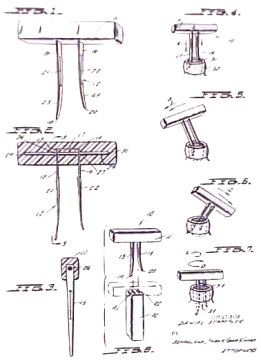 Regarding corkscrews in common use at the time of his application, Stampler writes "These spiral cork extractors are disadvantageous because they are difficult to handle for somebody not strong enough to pull the cork from the bottle when the cork is held by the spiral of metal; and once they have performed their function, they remain embedded in the cork."

Editor: It looks like the Postal Service did not treat Kaplan's gift with kindness. It was interesting to note the addition of the advertising on the sides of this prong puller handle "Dan Stampler's Steak Joint, In Greenwich Village, New York City." 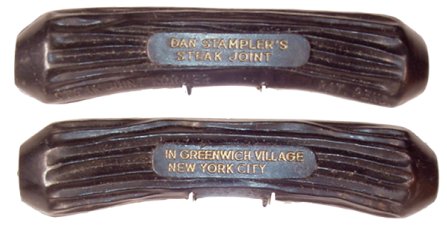