Who Invented the Crown Cap Lifter?

On February 6, 1894 William Painter received a patent for a "Capped Bottle Opener." Two years earlier Painter had received three patents for a "Bottle Sealing Device." Prior to his 1892 invention, over 1500 types of bottle stoppers had been patented. Between 1882 and 1890 alone there were three hundred and thirty-seven stopper patents. The trade press was writing "it is pretty hard to get up anything in the stopper line which is not already covered."

Painter accepted the trade press challenge with "The only way to do a thing is to do it." Painter had over eighty patents to his credit in his lifetime including improvements on a shoe blacking box, a lamp, and numerous pump and valve patents. He began his work on the "crown cap" in 1889 and in the end his success was certainly a lasting one. The crown cap became a mainstay in the bottling industry for generations to come. His design prevailed over the hundreds of other bottle closures and his crown cap is known and used worldwide.


Although the patent on the left has a lower number, the application was filed almost one year after the one on the right (May 19, 1891 vs. June 18, 1890). The earlier application includes a drawing of the cap being engaged by an over-the top style cap lifter 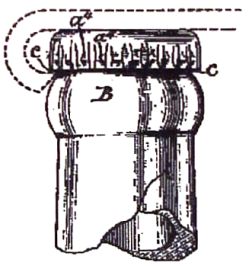 and states that the cap has "the edge of the flange so projected as to afford a reliable shoulder, with which a detaching lever may be engaged, for enabling a cap to be promptly removed as a result of a prying or wrenching action."

Three pages later in his application, Painter writes "It will be obvious that while some special form of opener may be required for detaching caps with the greatest possible convenience any thin-edged tool or knife may be readily applied to the projecting edge for detaching the cap, and to provide for use of a corkscrew each cap is centrally perforated at the top, enabling a corkscrew to better the sealing disk or cork."

He also hints at what is to come with "Bottle openers devised by me...and adapted to the removal of sealing-caps...will be made the subject of one or more separate applications for Letters Patent."

In the second application, Painter outlines more tools for removing his crown cap: "I have now so devised my loopless and close-topped caps and have so organized a combination thereof with the bottles that the caps can be almost readily detached by the use of a knife, a screw-driver, a nail, an ice-pick, or any usually and readily available pointed instrument as if a special opener were used, the latter being, of course, always preferable when bottles are required to be opened rapidly."

So Painter has now given the world his crown cap. It could be removed by a number of methods he described and all would have to wait for his further ideas on the "bottle opener."

Wirtz, Virginia - The third "Bottle Sealing Device" patent issued to William Painter on February 2 (Number 468,259) had an earlier filing date of November 5, 1899 with a renewal date of October 6, 1891. This patent dealt with a cap which had a loop formed in the sheet metal top. By inserting a pointed instrument into this loop the cap could be forced off.

In this patent Painter also provides for the use of a cork and a corkscrew. He writes: "My sealing caps possess much practical value for use in connection with long corks ... and by having a small hole in the center of the cap, as indicated in dotted lines in Fig. 1 (below), a corkscrew can be inserted for simultaneously withdrawing the cork and removing the cap."

An interesting addition to the patent drawings is Figure 12 which Painter says "Illustrates a tool devised for use as a hand-lever for wrenching the sealing-caps from bottles." Although the round loop at the top of the handle is not designed for prying off a cap, it certainly is a sign of things to come.

After William Painter patented his "Crown Cork", he founded Crown Cork and Seal Company in the Canton area of Baltimore, Maryland. He developed machinery for production and implementation and then set about the task of marketing the idea. An advertisement in the September 15, 1894 issue of the Western Brewer showed a variety of ways to remove the crown cork including using a corkscrew tip, a pocket knife blade and a spoon handle. These were some of the thoughts expressed in Painter's bottle sealing device patent applications.

How many of the huge number of corkscrews with tipped worms and knives with broken blades that turn up were used in failed attempts to remove a crown cap?

The tough job now was to convince brewers and bottlers to use the Crown Cork. His invention was eyed with skepticism. How would the beverage react to the cork? How long would it keep? To prove that the Crown Cork was the best bottle closure, Painter sent some bottle beer sealed with Crown Corks on a ship from North to South America. When the ship arrived, the beer had not lost its flavor. Some brewers and bottlers began to convert to his system. Others were still skeptical. Even Milwaukee brewing giant Pabst was not willing to accept this new fangled idea. They continued to cork their beer until 1910.

The company grew quickly, and by the time of Painter died in 1906, the company had plants in Europe, Asia, and South America. By the time the 1930s rolled around, Crown Cork and Seal was producing half of the world’s supply of bottle caps.

In 1908 a crown cap lifter was produced with an ornate silver handle. Interestingly it depicted a hand holding a corkscrew pulling a cork from a bottle. The cap lifter is marked PATD FEB 6 94

Just because the Crown Cork was being produced, it did not mean the end of other methods of sealing bottles. In order to make the Painter style cap remover more useful, early examples were produced with other functions. In the following cuts from Crown Cork and Seal advertisements we see the opener / bottle stopper combination, the loop seal remover, the aluminum stopper remover, and the Crown Cork remover.

Now a corkscrew had to have an added dimension. The cap lifter began to show up in many corkscrew patents as an accessory. 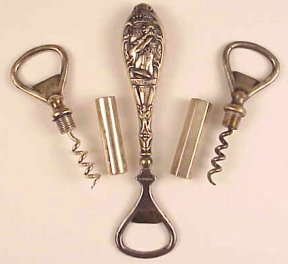 "The Bernardin Bottle Cap Company was founded in 1881 in Evansville, by Alfred Louis Bernardin, Sr. This started the first manufacture of metal closures in not only the United States, but as far as is known, in the world. Since Mr. Bernardin was in the wine importing business and they experienced trouble with corks blowing out in ocean shipments, he devised a metal clamp to fit over the cork and down around the neck of the bottle with a metal strap that tightened the clamp and prevented the cork from blowing out the in transit. Later, Mr. Bernardin invented many other types of metal closures for glass containers that are still popular and in current usage. He invented the beer cap, or crown cap, currently used on beer and soft drink bottles."

Back in the late 1970s I was researching bottle opener and corkscrew patents and I was surprised to come across a patent for a "Bottle Uncapping Tool" that dated almost seven months before the William Painter patent. United States Patent Number 501,050 had been issued on July 11, 1893 to Alfred L. Bernardin of Evansville, Indiana with assignment to the Bernardin Metallic Cork Company. 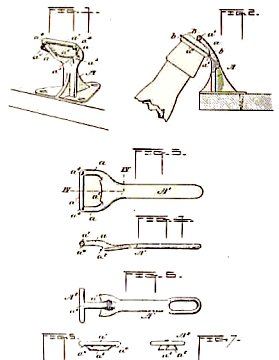 I pulled out the Painter patent and noted that Bernardin applied for his patent on March 14, 1893 almost two months before Painter's June 5 application. The major difference was Bernardin's tool was as he wrote "fixed to a counter or other stationary support, to adapt the bottle to serve as a lever in removing the cap" and Painter's tool was a handheld device.

In early 1982, I located a Mr. Alfred L. Bernardin in Evansville, Indiana and inquire about the patents. In his reply, he writes:

"The Bernardin Bottle Cap Company was founded in 1881 by A. L. Bernardin, Sr., my grandfather. I have a book of some twenty patents during his career up to his death in 1916, including the bottle cap opener.

Mr. Bernardin also claimed to be the inventor of the beer crown. When their factory superintendent disappeared for a month and turned up in Baltimore, Maryland, he had been hired by five men who, I am told, were the founders of Crown Cork and Seal Company. Patent applications were filed by both companies and a law suit resulted. Bernardin won the first appeal, which was reversed back and forth through several courts. The superintendent apparently claimed to have been instrumental in the development, which as the basis of the law suits."

"William Painter, of English descent lived at Baltimore in Maryland. By trade he was a Mechanical Engineer and by nature a genius in things mechanical...We cannot know for certain how he became interested in the bottle closure problem, but as so many others were at that time, it is more than likely that his position in the engineering shop brought him into contact with an inventor who was having working models made of some form of stopper."

Was that "inventor" from Bernardin's factory?

"In the summer of 1891 William Painter took a holiday and while staying at a seaside resort on Rhode Island he drew up the design for an 'over the top' sealing cap, which was destined to revolutionize the bottling industry. In other words the 'Crown' was born."

Did the crown cap ideas originate in Evansville, Indiana? Did someone from Bernardin's factory find Painter in Maryland and present him with Bernardin's working models? It is apparent that both firms were manufacturing bottle closures during the time they came up with "bottle openers." Was it coincidence that they both filed their applications around the same time?

And most importantly, given the fact that Bernardin filed for his bottle opener patent first, is he not truly the inventor of the "Crown Cap Lifter"?

You be the judge.