In the May 1, 2003 issue we featured corkscrew stamps from Argentina and Israel. On August 27, 2006 reader Jean Grignon submitted a Canadian First Day Cover featuring a corkscrew. The photos are reprinted below.

The Australian corkscrew stamp is part of a series of five stamps issued in July 2005.
Designed by Andrew Hogg of Melbourne.

The occasion that prompted the issuance of Bosnia & Herzegovina (Croat Administration) #102 was 'World Wine Day,' which is an annual event held the last weekend in May." 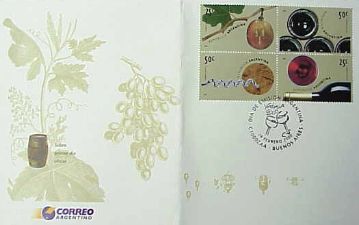 Above cover courtesy of Alf Erickson 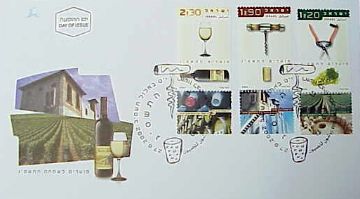 Reader Jean Grignon reports a new First Day Cover was issued in Argentina of September 16, 2006. Although there are no corkscrews on the stamps, the First Day Cover cancellation features a Lund Lever Corkscrew.

Check out the grape and wine stamps at http://www.grapeandwinestamps.com/

In the January 1, 2007 issue we published a photo of a Ross Pig in blue. Many readers inquired about this startling find. Sadly, it is only a virtual blue pig created by the guy who sweeps the floor at The Weekly Screw. Hopefully, one day a real one will turn up!